(Photograph of the Chapel Hill Community Chorus in the premiere performance of this work.) 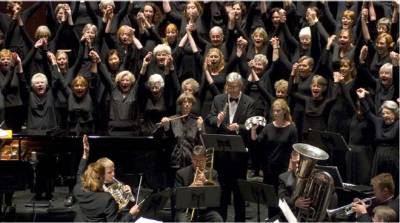 In honor of its 25th anniversary, the Chapel Hill Community Chorus has given the community it represents a gift. The chorus commissioned a work of music to commemorate its milestone, music that will eventually be published by E.C. Schirmer of Boston. Through distribution, the music will find a national audience, every copy noting the work's connection to the Triangle via the Chapel Hill Community Chorus.

The music by Gwyneth Walker, an American composer so busy that she is, as she says, "booked for the rest of my life," will premiere tonight at the chorus's spring concert at Memorial Hall. The work, a set of three songs adapted from American spirituals, is fittingly called Together in Song.

Though the chorus often sings Walker's music, scheduling conflicts have kept the composer, whose catalog includes over 150 commissioned works, from seeing the chorus perform her work. This time is different, and Walker is looking forward to the premiere.

"Obviously I'm very fond of them-they've been championing my music for years. I'm really glad to be able to do this together with them."

In striving to keep her catalog balanced, Walker said she doesn't envision doing any more works like Together in Song, having already "written quite a few. I put all my energy into [Together in Song], intending that this ill be my consummate community chorus work."

The work is scored for chorus, brass quintet, percussion and keyboard. Naturally, conductor and artistic director Sue Klausmeyer began building the rest of the program, she said, with an eye toward utilizing the instrumentalists who would already be on-hand. An additional theme of using works only by American composers began to emerge.

Meanwhile, the Carolina Brass, which will also perform at the concert, suggested the inclusion of the Walker's Raise the Roof! for brass quintet, which the ensemble has previously performed. With its foot stomping, the piece fits well with the third song of the commissioned work, "The Gospel Plow", which features chorus members playing percussion instruments as well as singing.

Klausmeyer said she is excited to have Carolina Brass at the concert. With recordings and a wide-ranging repertoire covering Classical to Dixieland, Klausmeyer appreciates the ensemble's "great sound and professionalism."

The familiarity and synergy of the quintet will polish tonight's performance. Typically, Klausmeyer brings together respected professional musicians to form a high-level orchestra to accompany the chorus. Such an orchestra is essentially a sophisticated pick-up band, even given quite admirable performances in the past. In having the Carolina Brass, the CHCC "automatically had a group that worked well together," said Klausmeyer.

The concert will also benefit from the musicians' familiarity with Walker's work, of which the post-intermission portion of the program will essentially be comprised. In an added bonus, Walker's popular and oft-performed work, How Can I Keep from Singing, has been newly arranged for this concert, the composer adding brass for the first time, making of the song another premiere.

"If that goes well, [this new arrangement] will go on my catalog list right away," said Walker.

Another first attached to the anniversary concert will be the group's first professional recording to be done live at Memorial Hall. The recording will be available for sale to the general public. Even a casual listen to a recording of last December's winter program, made only for distribution to chorus members, promises good things for this more sophisticated recording endeavor.

The concert, with all it's firsts, is a fitting tribute to the area, which contains a wealth of musical riches, and especially to a community that supports the efforts of citizens joining together to harmonize, thereby enhancing the cultural life of the Triangle for 25 years. 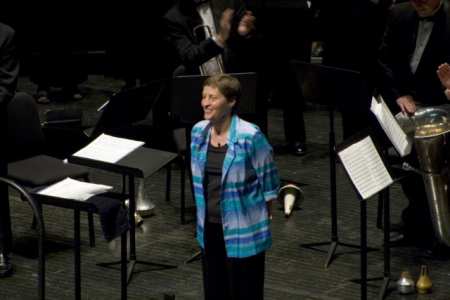 Chapel Hill Community Chorus president Neil Shipman is already dreaming of the 50th anniversary, though he says he won't be around to see it. The growth of the group musically and in terms of attendance portends a bright future, he believes, one that includes more ways to enrich the community. Contingent on funding, the board has already approved the formation of two chamber groups, according to Shipman. The portability of smaller ensembles means that rather than listeners coming to the chorus, the chorus can take the music to listeners in places such as schools and retirement communities. Additionally, providing entertainment for corporate functions and the like will give the singers additional exposure and raise money.

Finding new sources of funding is an issue, the money needed to turn the group's goals into reality.

Not that Shipman is worried. Concert attendance has grown every year, he says. Two seasons ago, the chorus had a standing-room-only crowd for its one Christmas concert, turning people away at the door, according to Shipman, so last year the chorus decided to put on two December concerts, drawing sell-out audiences of 700 each night.

There are high hopes for attendance for tonight's anniversary performance as well. With so much in place to mark the event as special, concertgoers should be in for a treat.