Review of "Chanties and Ballads" (1995) for tuba and orchestra 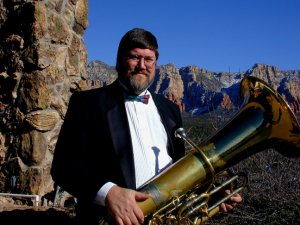 Chanties and Ballads is a fifteen minute concerto for tuba and orchestra in three movements that takes great advantage of teh lyrical and technical capacities of the solo tuba within an orchestration context that most orchestras can program without extensive rehearsals or hiring of extra personnel. The score calls for paired winds, two trumpets, two horns, one trombone, two percussion, and strings. Because of the brilliant scoring and emphasis on accessibility of sound, most college and community orchestras should be able to bring the parts up to speed within an average preparation period for a concert. The range of the solo tuba part is extensive from CCC to g (super-1) with a suggested ossia in one place in the first movement of c (super-2) although the characteristic range is within and below the staff for most of the piece. The first movement, "Coming Up for Air", is described by Walker as "a jaunty melody for the tuba with ascending scale-runs and glissandi suggestive of rising up to the surface." The second movement is entitled "Far From Home" and is a beautifully written ballad featuring interplays and exchanges between winds, canonic trumpets, solo trombone, and strings all integrating with the solo tuba line. It also includes a unique orchestration device of one of the percussionists pulling on block and tackle rigging to imitate the hoisting of a sail. The final movement, "Bonny Tuba" begins with a Jaws-style musical opening that quickly transforms into a set of theme and variations on the well-known folk tune, My Bonny Lies Over the Ocean which includes among other things, a minor key variation, a triplet variation, and at one point, extensive theatrical manipulations of the mute.

Gwyneth Walker is unique among living composers in that she supports herself entirely through her composing and excels in writing in a style that reflects the common bonds between musicians and communities. With a combination of clever and accessible writing and a virtuosic but playable solo part, Chanties and Ballads is the most original and fresh tuba concerto this reviewer has ever played. It was premiered by the Millikin-Decatur Symphony, A. Wesley Tower, conductor and Mark Nelson, tuba soloist on February 4, 1996. Other Walker brass pieces worth investing are the brass quintets Bright Brass and Raise the Roof! They are both a delight to play and are full of performer and audience appeal.