View/download a PDF file of the publicity flyer featuring Dale Jensen and the Sarasota Pops.

View/download a PDF file of selected sample pages from the solo tuba part of this work.

(Photograph of tubist Jay Hunsberger who performed the work with the Sarasota Pops Orchestra.) 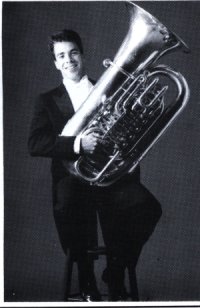 Commissioned by Mark Nelson, tubist and The Millikin-Decatur Symphony Orchestra.

The tuba is an instrument with depth of tone and yet a buoyant and agile personality. Thus, it seems uniquely suited to music with a nautical flavor such as these Chanties and Ballads - Songs of the Sea.

The first movement, "Coming Up For Air," features a jaunty melody for the Tuba with ascending scale-runs and glissandi suggestive of rising up to the surface.

"Far From Home" is a ballad -- perhaps a lament sung by a homesick sailor.

The final movement, "Bonny Tuba," is a set of variations on a well-known melody. There is the customarily somber (perhaps sunken) variation in the minor mode followed by a virtuosic triplet arpeggiation variation. And, since the performance skills of a fine Tuba player are intended to be seen as well as heard, the Tuba mute becomes a featured visual element in this movement.

Chanties and Ballads was completed during the summer of 1995 in the composer's studio on the Brainstorm Dairy Farm in Braintree, Vermont. Geographically remote, the ocean was nevertheless present in the imagination!