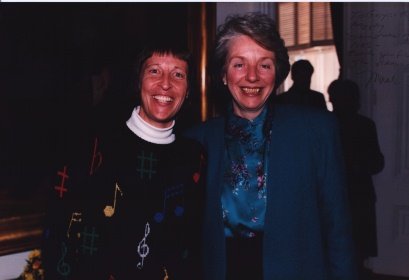 The phone rang at the Braintree Hill home of composer Gwyneth Walker. It was the governor.

Gov. Madeleine Kunin had a question: Would it be OK to kick off her Jan. 3 inauguration with a performance of some of Gwyneth Walker's music?

That's the kind of question that is music to the ears of any composer, and permission was soon granted. As a result, Ms. Walker's Raise the Roof! for brass quintet will be featured at the inauguration.

Randolph area residents have already heard Raise the Roof! It was commissioned by the Chandler Cultural Foundation last year and was given its world premiere as part of the 1987 "Christmas with the Randolph Singers" program.

It was played by the Central Vermont Brass Quintet, which includes Randolph trumpet player Charles Gasque. That Quintet will also play the piece at the inauguration Jan. 3.

Gov. Kunin heard the four-minute piece at a composers' symposium this summer in Burlington. She was apparently taken with the work, which includes extra-musical foot-tapping effects and is infused with a jazzy sort of syncopation.

The selection of Ms. Walker's composition for Gov. Kunin's inaugural capped a year in which the Braintree composer has received unusual recognition within Vermont and beyond.

Recently she won a commission offered by the Vermont Agriculture and Arts Association for a composition honoring the Vermont family farm. The composition, which has been completed, set to music lyrics of Martha Holden, a farmhand from East Montpelier. It will be performed by the Vermont Symphony next year, as will another Walker work, the official Vermont Bicentennial Suite.

Another Walker composition, Match Point (originally commissioned by the Randolph High School Band) will be heard at First Night in Burlington, played by the Vermont Symphony under the direction of Efrain Guigui, complete with tennis racquet.

This summer another Walker piece, an arrangement of hymn tunes, was given its premiere performance by Vermont Symphony players in the Braintree Hill Meetinghouse.