(Photograph of lyricist Martha Holden and Clematis the heifer.) 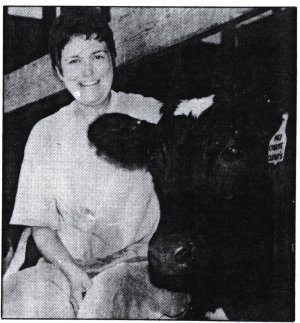 After the Horseshoe Contest and Dairy Goat Show and before the day's last Demolition Derby, there'll be time out Sunday at the 118th Tunbridge World's Fair for the world premiere of two choral works.

A musical premiere at a country fair may seem about as appropriate as wearing a tuxedo to a barn dance, but these works are deeply rooted in Vermont.

Not even the Tobacco Spitting Contest can claim to be more indigenous. The spitters may be from Vermont, but who knows where the tobacco comes from, after all?

The choral works, however, are Vermont home-grown. With words and music by Vermonters -- the Barre Choraleers under the direction of Catherine Orr.

And the songs celebrate the reason for the Tunbridge fair -- the agricultural heritage at the root of the Vermont mystique, the family farms that have shaped the landscape that now lures the developers.

The collaborators in these songs have varying backgrounds of farm experience, ranging from composer Alan Walker who admits that the closest he's come to agriculture is growing his own garden to lyricist Martha Holden who works as a laborer in the cowbarn and elsewhere on Austin Cleaves' Farmont Farm in East Montpelier.

Composer Gwyneth Walker, who wrote the music for Holden's lyrics, lives on a dairy farm in Braintree, a village of Randolph, where she says she is continually motivated by the activity and energy around her.

She wakes each day to the sound of cows coming into the pastureland directly below her bedroom window at 6 a.m., and the daybreak she has witnessed on the hill above the meadow was the inspirations for her The Light of Three Mornings, an orchestral piece.

...The collaborations have produced two works -- Forebears words by McCormack, music by Alan Walker, and Three Songs in Celebration of the Family Farm, words by Holden, music by Gwyneth Walker.

...Clematis, a Holstein calf with a very soft face, was the inspiration for a good chunk of Holden's lyrics.

Now a heifer, as a calf, she impressed Holden with her gentle mannerliness.

"All of the other calves in the pen would jostle and crowd and step on my feet," Holden says. "But not Clematis."

"She was rather shy. She would stand back and wait."

"And she had the softest face. All calves have soft faces, but hers was the softest."

...Holden's lyrics are of the farm of the present and sing of her belief in the healing power of farming.

A former attorney, she says she left the legal professional when she discovered that it was unhealthy not only for those involved in it but for everyone who came into contact with it as well.

Already interested in psychic healing, she came back to Vermont -- where she had grown up -- and began working in massage before joining Cleaves' crew of farmhands three years ago.

"Farming is very healing," she says, and her lyrics sing of the pleasures of waking in the morning to hear the sounds of the compressors already at work in the milking barn, the rhythm of the "mega munching very, very darling bunch of moos" and the joys of petting Clematis' soft face amid the gamboling calves."They nudge, they won't budge, they leap, they dance, they nibble and chew, but not Clematis -- or not much."

No one familiar with Gwyneth Walker's music will be surprised to hear the rhythmic "tss, tss, tss" of the milking machines accompanying the lyric line.

Touches of visual and aural humor are almost standard in her lighter works. Match Point, her musical tennis game, is probably the best known example, with the conductor in shorts instead of tails, leading the orchestra with a racquet, and the timpanist beating out rhythms by bouncing colored tennis balls on the drumheads.

Though she's lived on a dirt road with cows under her window ever since she came to Vermont, Walker still did some research for the piece, visiting a few barns at milking time to get the sounds of the milking machines just right.

Dartmouth's Max Culpepper describes Walker as a "real grassroots composer" and the Syracuse N.Y. Society for New Music describes her music as "like her, energetic, lean and competent, with a frequent spark of humor."

She has been composing full time since 1982 -- most of that time in her studio above the cow pasture in Braintree -- following a career of 14 years teaching theory and composition at Oberlin College Conservatory, the Harford, Conn. Conservatory and the Hartt School of Music, also in Connecticut.

...Gwyneth Walker has traveled across the continental United States to hear her work performed in various chapels, churches, and concert halls, but the premiere at the Tunbridge World's Fair will be a first.