for Tenor Solo, TTBB Chorus, and Piano (2016)
(This work is a choral adaptation of the solo song cycle Songs from the High Sierra.)
(The choral cycle's final movement, "Descent: Sequoia", is also available as a separate item.)

Download a PDF file of selected samples pages from the score of this composition. For perusal only -- not printable.

(Photograph of Gwyneth Walker with the Tiger Glee Club, conductor Trey Davis, and tenor Greg Gallagher at the premiere) 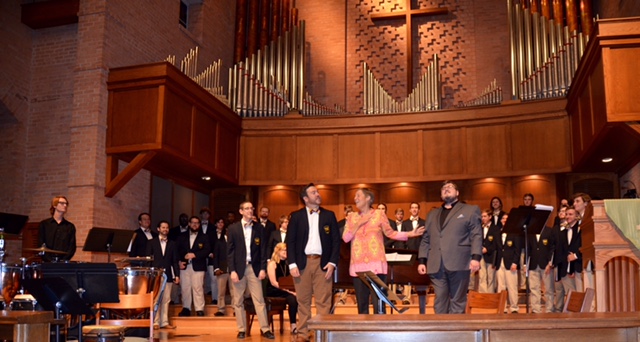 When John Muir was a student in the University of Wisconsin, he was a frequent caller at the house of Dr. Ezra S. Carr. The kindness shown him there, and especially the sympathy which Mrs. Carr, as a botanist and a lover of nature, felt in the young man's interests and aims, led to the formation of a lasting friendship. He regarded Mrs. Carr, indeed, as his "spiritual mother," and his letters to her in later years are the outpourings of a sensitive spirit to one whom he felt thoroughly understood and sympathized with him. These letters are therefore peculiarly revealing of their writer's personality. Most of them were written from the Yosemite Valley, and they give a good notion of the life Muir led there, sheep-herding, guiding, and tending a sawmill at intervals to earn his daily bread, but devoting his real self to an ardent scientific study of glacial geology and a joyous and reverent communion with Nature.

Touching the Infinite Sky is a choral adaptation (for Men's Chorus with Tenor Soloist) of the composer's solo song cycle, Songs from the High Sierra, for High Voice and Piano. The original songs were completed in 2014. The new work was commissioned by Louisiana State University for the Tiger Glee Club, which premiered the music on October 3, 2016 in Baton Rouge, Louisiana.

The new choral adaptation employs the additional voices as an expansive background to the soloist. As the chorus joins in the accompaniment sonorities, a sense of space and depth is created, well-suited to songs about the wilderness. The chorus also shares melodic material with the soloist, in dialogue or in unison.

Newly-composed choral introductions are inserted before the first and last songs. The texts are comprised of fragments from the songs to follow.

The five letters which provide the lyrics for the songs (adapted by the composer) were selected for their range of topics and sentiments. Some portray the wildlife in the mountains ("Glacier Birds..."). Others extol the beauty of the Sierra ("Mountain Glory," "Yosemite Falls"). One expresses the whimsical/temperamental personality of the author ("Ice!"). And the final letter ("Sequoia") speaks reverently of the great trees, in a language both naturalistic and sacred. They are the "greatest light in the woods, the greatest light in the world."

The musical settings, especially in the piano accompaniment, are quite programmatic. Glacier birds scamper up and down the keyboard in tone clusters. "Icy" glissandi float off. The great trees take root in large, block chords, and waterfalls cascade down in scales.

There is personality in the letters. The bond between John Muir and Mrs. Carr (whom he addresses formally) is one of great kinship -- a blending of the souls, a "spiritual romance." As he marvels at the beauty of the wilderness, he writes ardently, "I wish that you could see this..." When he learns that Mrs. Carr, a botanist (whose plants suffer from the frost), dislikes ice, he chides her, and creates a "mock argument" over the value of glacial ice.

The songs begin with an ascent into the mountains. They close with the return to the coast, to the magnificent Sequoia trees, where John Muir camps for the night, in the company of a squirrel. Charmingly, he writes "therefore, my Carr, goodnight."