The Rose, the Briar, and the Bicycle

Songs of Love and Adventure
for SATB Chorus, Oboe, and Piano (2002)
(a Bb instrumental part is also available for either clarinet or soprano saxophone)

Return to Gwyneth Walker Music Catalog
Read a review of The Rose, the Briar, and the Bicycle (2002) for SATB chorus, oboe, and piano by Thomas R. Vozzella, The Choral Journal.

Download an MP3 file of a performance of this work (clarinet instead of oboe) by the Texas State University Chorale, Vanguel Tangarov, clarinet, Joey M. Martin, conductor.

Download an an MP3 file of the third movement of this work performed by Albany Pro Musica, David Griggs-Janower, conductor with Amy Selkirk, oboe.

View/download a perusal PDF file of this work.


(Photographs from a performance with the Chapel Hill Community Chorus.) 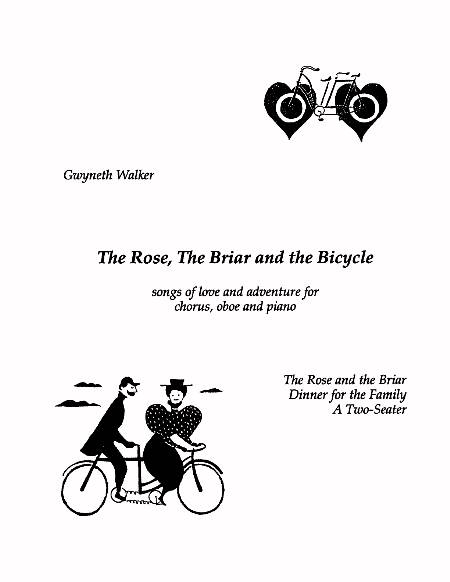 The Rose, the Briar and the Bicycle are contemporary adaptations of familiar ballads and love songs. The intent is to expand upon the originals, especially with the addition of the Oboe -- a primary agent for color and character in each of the songs.

The first song, "The Rose and the Briar," is based on the ballad "Barbara Allen." The Oboe introduction presents a filigree pattern which runs throughout the song. With each verse, the filigree is varied to reflect the images in the lyrics: the buds of May; the dying Sweet William; Barbara's indifference (and dancing); hard-hearted Barbara Allen; and her eventual lamentation. During the final verse, the Oboe initiates a dissonant chromatic line which intertwines with the chorus and then rises above, as a briar.

An Interlude follows to connect the first song to the second. The tempo for the new song is set by the Pianist tapping the piano lid at a "trotting tempo -- as a fox setting out in search of food." For indeed, "Dinner for the Family" is based on the ballad, "The Fox." Once again, the Oboe provides commentary on the lyrics: the scurrying fox; the awakened Farmer; the sound of the horn "both loud and shrill;" the quacking duck; and the fox running back to her den. Throughout this song, the energy of the fox's adventures characterizes the Oboe part. 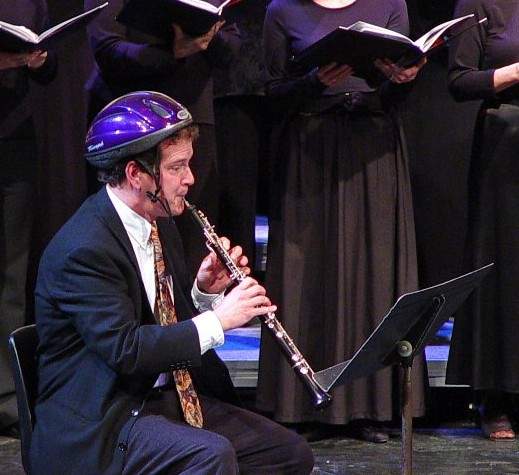 The frantic pace of the fox chase ends with a second Interlude, marked "at a graceful tempo." The focus of the music now shifts to a bicycle. Perhaps a bicycle bell may be heard in the trills played by the Oboe. A waltz rhythm is established for "A Two-Seater," based on the 1890s song, "A Bicycle Built for Two." The choral style for this song is often 4-part Men or 4-part Women's harmonies, in a "Barbershop Quartet" idiom reminiscent of 1890s. The Oboe offers quiet, background arpeggio patterns at first. As the song progresses, these arpeggios become more abundant and rapid. Near the end of the song, the arpeggios flow up, down and around the chordal pitches in large phrases suggestive of the spinning of bicycle wheels. The ringing of the bicycle bell brings this song of courtship to a close.

In the second song, m. 20 should read 'the ducks and the geese were kept therein."