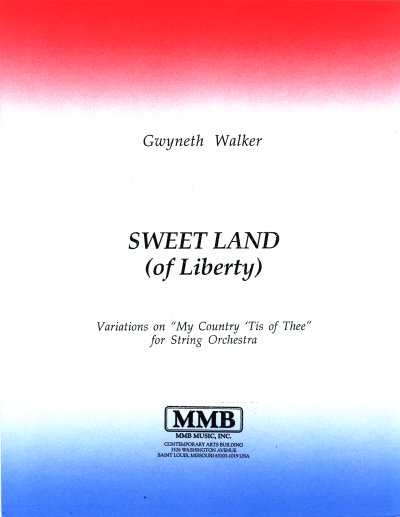 Commissioned by the Abbot Academy Association in celebration of the 350th Anniversary of the Town of Andover, Massachusetts 1646-1996 and dedicated to Robert and Susan Lloyd -- cherished Musicians and Teachers.

The words for "My Country 'Tis of Thee" were written by Reverend Samuel Francis Smith in the town of Andover, Massachusetts in 1831. And today, "America House" still stands proudly in commemoration of this patriotic verse. Thus, it is especially appropriate to use this song for the celebration of Andover's 350th anniversary.

Sweet Land takes the original melody and elaborates it within a 20th-century American musical language. This work might be described as a contemporary excursion based on a historical source. Elements of folk, jazz, blues and rock styles can be heard throughout.

The formal structure is a theme and four variations -- Theme (stately), Variation I (lively), Variation II (in a 'blues' style), Variation III ('furtively') and Variation IV (triumphantly). And although the theme is transformed to the limits of recognition in the 'blues' section, it reappears more noticeably in the 'furtive' motives and asserts itself forcefully at the end.

The intention in creating Sweet Land was to bring renewed energy and affection to a song which has endured for centuries as part of our American heritage.