Listen to a RealAudio (G2) stream of a performance of this work by the Luther College Ensembles at Juletide 2001, Timothy Peter, conductor.


(Photograph of Gwyneth Walker with Jeffrey Swaim, holding the cowbell used in Rejoice!) 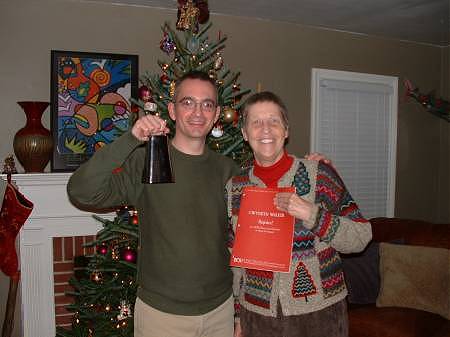 Commissioned by Marilyn Haugen Roverud for Juletide 2001, Luther College as a gift to her husband, Jeff, in celebration of their 35th wedding anniversary. Premiered by the Luther College Choirs and Orchestra, Decorah, Iowa, Timothy Peter, Conductor.

Rejoice! -- Christmas Songs are new musical settings of three traditional Christmas carols or poems. The intent is to explore the dramatic character of each song.

"What Child is This?" focuses on the question aspect of the lyrics: "What child is this...?" Therefore, the answer: "This, this is Christ the King!" is delayed until after two verses. The first round of questions are posed by the men, with the women's voices interjecting additional phrases of "What child, what child is this?" The second verse reverses the roles. Then comes the much-anticipated refrain.

The third verse presents the chorus in static harmonies, while the accompaniment provides the rapid, "shimmering" patterns reflective of the lyrics: "So bring him incense, gold and myrrh..." The final refrain (answer) is triumphant.

"Love Came Down at Christmas" is a new setting of the poem by Christina Rossetti. Here, the image of descending (from the title) is the focus of the introduction, marked "gently, as love descending from heaven, or snow falling." The pattern of stepwise descent is then taken up by the chorus. The essence of this song is gentleness and simplicity. The tonality throughout is C Major, and the meter is 4/4. At the end, while the chorus holds the final chord, a little cadenza is heard in the accompaniment -- perhaps a single snowflake descending at Christmas time.

A bridge passage leads into "Good Christian Friends Rejoice!" This is a joyful, lilting song. Many extra "Rejoice's" are included. The tempo is quick. And the chorus is called upon to sing with as much energy as possible.

[One small note, for the astute listener: the composer, a resident of a family-owned dairy farm, often inserts cows into the lyrics of her songs.]

Rejoice! was composed during the summer of 2001 at the composer's studio on the Brainstorm Dairy Farm in Braintree, Vermont.

Rejoice! -- Christmas Songs is a work available in various scorings, both of the choral parts and the accompaniment. The table below provides the ordering catalog numbers for all available versions. Below the table is provided information about using reduced orchestrations.


Comments regarding performing Rejoice! with alternate or reduced orchestrations

The composer has frequently received inquiries regarding performing Rejoice! -- Christmas Songs with orchestrations and configurations smaller than the original full orchestra. Some general comments are provided here for mixed instrumental combinations. Information is also below about using a chamber orchestra.

I have had quite a few requests for different orchestrations. Several church choirs have wanted to perform the work with full orchestra, but feared that they could not amass the full ensemble. However, once they started rehearsals, word got out about the music, that it was fun and easy to play. And, by the time of the performance, a full (community) orchestra had gathered. This included students home for the holidays, high school students, friends of the choir members, etc. Since this orchestration is suited to community orchestra, many players can be involved. And, it seems to be quite a fun adventure!

Specific comments regarding using string quartet and organ: The organist will play from the keyboard reduction (the choir octavo), not the organ part of the full score. The strings will play their parts as written. And, the organist can scale back when the strings are playing to allow for them to be heard. Perhaps you will want to mark up the organist's octavo to show where to pull back.

I think that using a string quartet could be quite nice, especially in the second song. If these are strong players, then their sound will fill the church. The organist will want to rest during the times when the strings are featured.

The only alteration that I would suggest would be at letter M of the third song. As can be seen in the octavo (and heard on the recording), there are some nice solo lines for brass here. Just three phrases. One might consider writing these out for solo VLN, VLA, and VCL and letting them play.

In short, I think that this will work using the keyboard accompaniment from the choral octavo with the string parts as written. The organist (and/or music director) will need to listen to the strings enough to know when to pull back on the organ. And, the little "riffs" in the last song at letter M could be charmingly played by solo strings, especially if they tried using a "blues" style in there (to mimic the brass soli).

Various choirs have inquired or attempted to make use of handbells in the performances of this work. In my experience, the resulting sound is "overly cluttered" and the handbells interfere with the energy, motion, and all the various elements going on in the accompaniment of Rejoice!. I thus recommend that handbells not be used in performances.

It is possible to omit the following instruments (although it would be nice to include them):

The last song, "Good Christian Friends," features brass. Therefore, if one is missing TPT 3, give this part (the Bb version) to CL to play for just this movement. [TPT 3 is more vital than CL.] Also, if one has an extra CB player, share the Tuba part for this last song. A VCL can cover TBN 3.