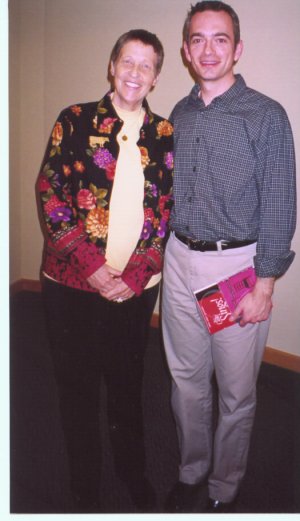 I had a chance to attend Bel Cantos opening concert of the season  a program of choral music by American composers.

Since America had no distinguished composers until the 20th century, this means that such a concert is bound to be filled with modern music, which far too often means ugly meaningless sounds designed to punish the concert attender for daring to expect beauty.

When I hear musical experts conversing, they often speak as if the only alternatives in American music were John Cage and Stephen Foster. But theres a lot of beauty and power in the vast musical space between Nixon in China and Jeannie with the Light Brown Hair.

Of course, such conversations are always in the context of complaints about how the lowbrow American audience just wont attend live performances anymore. Its because of CDs, they say. Why go to a local concert when you can get great performances on your stereo?

Maybe. But I think its also because many times when we ordinary people go to concerts, were slapped around by ugliness and made to feel stupid for not getting why anti-harmonic slapdash music is somehow better than the stuff we actually like.

This concert program, however, was well chosen  both the composers and the lyrics. A long setting of poems by Robert Frost had many lovely moments, and a lively arrangement of Appalachian folk tunes gave the concert a cheerful ending.

The highlight of the concert, however, was Gwyneth Walkers inspired setting of Harlem Songs, three poems by Langston Hughes.

Hughes was a fine poet, but in some of his poems he did not so much evoke an experience as refer to it  so if we hadnt had the experience, we werent going to gain much of a sense of it from the poem. This is not a flaw  what poet doesnt rely sometimes on references to shared cultural experiences?

But Walker took these poems and, in a way, annotated them, bringing all the underlying meanings and references to vivid musical life.

In short, I have never heard poems better served by a choral setting than these of Hughes by the music of Walker. My favorite was the dreamy, dancy Harlem Night Songs, where she drew into the song all the moods of Harlem, and all the dreams of love that are shared by people wherever they live. Its hard to take the words I love you and make anything out of them musically, but Walker did it over and over in this song.