Listen to a RealAudio (G2) stream of a performance of the choral version of this work by the American Repertory Singers, Leo Nestor, conductor.

Download an MP3 file of a performance of the choral version of this work by the American Repertory Singers, Leo Nestor, conductor.

Download an MP3 file of a performance of the choral version of this work by the University of California Alumni Chorus, Mark Summer, conductor. 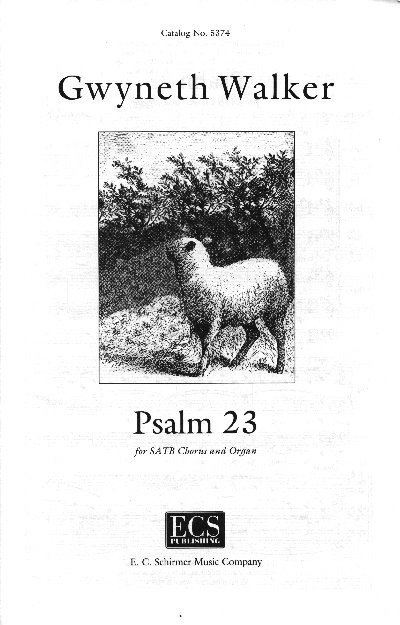 The choral version was commissioned by the Worcester, Massachusetts Chapter of the American Guild of Organists for the 1999 Region I Convention in Worcester -- June 28, 1999.

The solo vocal version was created in memory of the composer's mother, Adele Frank Walker, whose love of music lasted a lifetime. The song was premiered at the Memorial Service on September 23, 2000, at the First Presbyterian Church of New Canaan, Connecticut. Performers were Denise Walker (Soprano) and Gwyneth Walker (piano).

In 1998 Dr. Gwyneth Walker composed a setting of Psalm 23 for the Worcester, MA chapter of the American Guild of Organists (AGO). This anthem for mixed voices and organ accompaniment was premiered at the 1999 Region I Convention of the AGO, which was being held in Worcester that year. Two years later Dr. Walker revisited the work, adapting it into a solo setting for high voice and piano. The version that we hear today is a transposition for bass voice that the composer made for David Arnold in celebration of the wonderful relationship that she has established with Centenary Church.

Dr. Walker crafted a serene musical setting to illustrate the idyllic nature of this beloved text, which seems extremely appropriate for this eleventh generation Quaker who describes music as a gift from God. A true lover of nature and creation, I can imagine Dr. Walker strolling through the Vermont countryside as she is wont to do as compositions are forming in her mind. The babbling brook and green pastures on her dairy-farm home surely helped her imagine the beautiful images depicted by the Psalmist.