View a video presentation of selections from this work as part of an all-Walker concert performed by the Bella Voce Women's Chorus of Vermont, Dawn O. Willis, conductor.

Download a PDF file of the score of this composition. This file of excerpted sample pages is for perusal only and is not printable. To hear MP3 files of the complete songs, see the above links.

Download a PDF file of the May Swenson poetry used in the original choral cycle Songs for Women's Voices as text for printing in concert programs.

(Photograph of Jamie Shaak, pianist, Maria Lagios, vocal coach, Michelle Areyzaga, soprano, and Gwyneth Walker after the May 2005 Chicago, Illinois Gala for the release of Shaak and Areyzaga's all-Walker CD, "The Sun Is Love.".) 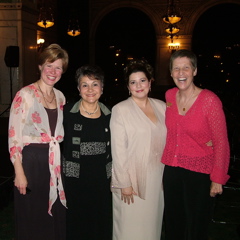 Mornings Innocent are musical settings of four poems by American poet May Swenson. The poems address a variety of topics -- from feminism to romance to death -- yet they speak with one voice, one style, and one life-affirming philosophy. The musical settings are intended to present these poems in a simple and straightforward manner which seeks to portray the beauty, humor, and passion of the words.
It is suggested that each poem be read aloud before the performance of each song. The poems may also be printed in the concert program. But it is recommended that the audience read the poems in advance (pre-concert or during intermission), perhaps also following along in the printed version during the reading aloud, and then focus on the singer during the actual performance.

May Swenson (poet) was born in Logan, Utah in 1913. She died in Ocean View, Delaware in 1989. In her lifetime, she worked mainly as a poet, publishing over 450 poems. Much of her life was spent in Greenwich Village, New York City, where she was a chancellor of the Academy of American Poets.