for SATB Chorus, Opt. Children's Chorus, and Piano (2006)
The second song, Be Thou My Vision, is also available for solo voice and piano, SSAA and piano, or TTBB and piano.

Download an a MP3 file of the second movement ("Be Thou My Vision") of this work performed by the Aurora University Concert Choir, Lisa Fredenburgh, director.


(Photograph of the North Guildford Congregational Church Choir at the premiere.) 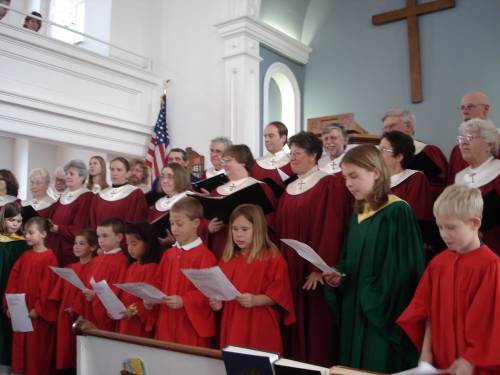 Three Folk Hymns were created for informal church settings. It was envisioned that these simple arrangements might be enjoyed by small choirs, standing in the front of the church, using piano accompaniment. Adult choirs and childrens choirs may both participate in singing these hymns.

Rather than the traditional four-part hymn style of harmonization, these songs explore alternatives. "I Will Arise" comprises vocal lines which may be divided among the chorus according to voice range  with melody, harmony and descant designations. It might be possible to perform this song with either just men or womens voices, or in any combination, including adding the children. A roughhewn style of singing and playing would be appropriate.

"Be Thou My Vision" has a dimension of an entreaty to the Lord, as if asking for the Lords presence to be there at all times. Thus, the first two words Be Thou, are repeated as a background during the singing. Even the opening piano introduction speaks the two-note pattern which will fill the entire song. The mens and womens voices are paired in dialogue throughout much of the music.

"Standin in the Need of Prayer" is a lively tune in swing rhythm. New words are added within the lighthearted approach. It becomes evident during the singing that the choir feels that they are in the greatest need of prayer! [Not you! they sing, pointing at the congregation. Its me! they exclaim, Standin in the need of prayer.] Childrens voices are definitely envisioned as part of this rendition.

The creation of these Three Folk Hymns was inspired by the composer attending worship services in a number of rustic New England Protestant churches. The choirs were often small, but very enthusiastic and talented. A piano seemed to be in place near the front of each church. So, enhancing the repertoire for these settings was a natural choice!