Return to Gwyneth Walker Music Catalog
Read a review of Essay for Orchestra (1985) by Jim Zebora, The Meriden Record-Journal.

Listen to a RealAudio (G2) stream of a performance of this work by the Meriden Symphony, Bruin Lipman, conductor.

(Photograph of composer Gwyneth Walker and conductor Toby Tolokan during a rehearsal of the Willimantic Community Orchestra, November 1985.) 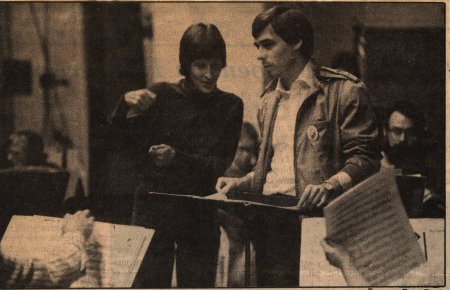 Essay for Orchestra is a one-movement "short story." The opening melody introduced by the trumpet (A Minor tonality, emphasis on the interval of a minor 3rd) generates many off-shoots which form the basis of the work. Solo passages answer back and forth at the beginning. The full orchestra gradually joins in. Tempi and dynamics grow into a forceful final statement of the theme.

A coda at the end brings back the soli trumpets, followed by a "whisper" fragment in the strings.

Essay for Orchestra is the result of a commissioning project sponsored by the Connecticut Orchestra Consortium. The work was premiered by the Wallingford Symphony in March, 1985, and received subsequent performances by the Meriden, Ridgefield, Manchester and Willimantic Symphony Orchestras.