When Whitman College freshman Eric Hamilton read Virginia Hamilton Adair's poetry for the first time last year, he couldn't help but see a connection to his own family.

On Friday, Hamilton and about 90 other Whitman College students will perform the world premiere of An Hour to Dance, a three-part choral composition written by Gwyneth Walker, a renowned Vermont composer.

The composition is a musical interpretation of the 84-year-old American poet's works. The Whitman College Women's Chorus will also perform two other compositions by Walker.

"My grandmother went through the Depression, and my brother and I never understood why she was always scrimping and saving until we were older, until we learned about the Depression," Hamilton said.

When he read the seven poems Walker had chosen to use in her composition, he said the words really touched him. Then later when the music arrived and the choral group began rehearsing it in January, Hamilton said his feelings of connection deepened.

Hamilton said his grandmother was always afraid of losing the things she owned, she was afraid of letting go. And at the end of her life, Hamilton said she dreaded her death just like Virginia Adair dreaded the loss of her own sight. She didn't want to go, but her death was like a train "coming to a crossing."

Libby Dorsch, a junior majoring in English at Whitman, said the last poem in the seven-part composition is a wonderful example of the contrast between individual experiences and the movement of life. The poet talks about her blindness as being the end of her passion, reason and rhyme. Yet, life continues even in this declaration, she added.

What Walker suceeds in doing with her musical composition is building on the emotional impact of Adair's words, she added. Dorsch will be singing a solo part in the last part of the 21-minute composition. 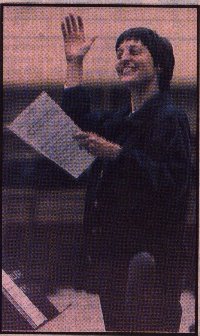 Walker said she first heard Adair's poetry on national public television and was impressed by its voice. She was also taken by the imagery and emotions the poetry elicited.

Walker, a former faculty member of the Oberlin College Conservatory, resigned from academic employment in 1982 in order to pursue a career as a full-time composer. She now lives on a dairy farm in Braintree, Vt.

Walker has composed over 100 works for orchestra, band, chorus, and chamber ensembles. Her recent works include About Leaves, an orchestral tone poem based on the poetry of Robert Frost.

Hamilton, Dorsch and other members of the student group raised the $2,000 to pay for the commissioning of An Hour to Dance, said Robert Bode, director of the chorale and assistant professor of music at Whitman.

Every two or three years, the group has commissioned American composers to write compositions and then visit the college for the premiere performance, Bode said. This year the composition is also sponsored by the Minneapolis Vocal Consort.

"It's a wonderful positive experience," he added.