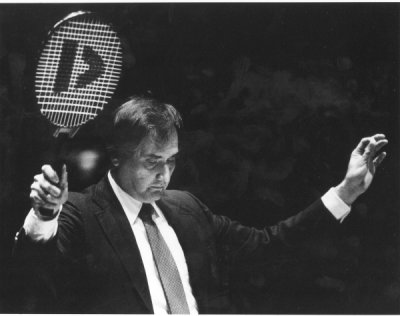 Tennis rackets and violins may not sound like a harmonious combination, but the Wallingford Symphony Orchestra has pulled some strings to show the two can make sweet music together.

From the time Music Director Philip Ventre steps to the podium to begin conducting Match Point until the final note, members of the orchestra may look more like tennis players than musicians, as percussionists bounce tennis balls off their drums and brass players use them for mutes.

"It's a fun piece," Ventre said. "The first movement, the conductor walks in carrying a tennis racket. While the orchestra tunes up, he tunes up the racket."

The piece was written by Gwyneth Walker, a resident of New Canaan.

"Tennis is serious business," said Walker. "A proper tuning up is essential."

The tension mounts during the second movement titled "Anticipation" when tennis balls are used to "play" the instruments, and in the third movement, the sound of a ball hitting the racket and the court is written into the music.

The fourth and final movement incorporates the patterns of tennis strokes into the conducting.

A surprise ending will be understood by one and all, according to Ventre who refused to divulge what it will be.