(Photograph of the Randolph Singers and the Vermont Philharmonic; photo by Stefan Hand/Times Argus.) 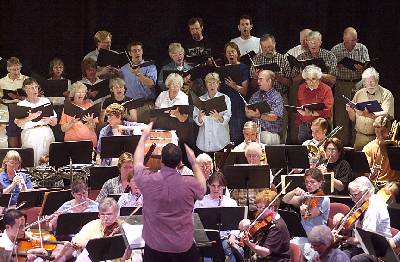 This weekend, the Vermont Philharmonic is going to the opera. Vermonts oldest community orchestra, joined by the Randolph Singers and mezzo-soprano Marjorie Melnick, will present Raise Up Your Voices, Saturday at the Barre Opera House, and Sunday at the Chandler Music Hall in Randolph. The program will feature Gwyneth Walkers New Millennium Suite, and choruses and arias from famous operas.

Theres a candy house in Hansel and Gretel, explained Philharmonic Music Director Louis Kosma. Well, theyre going to get all that candy and then some.

The New Millennium Suite, premiered in Bradenton, Fla., on Dec. 31, 1999, by the Sarasota Symphony, is the major work of the program. The Braintree composer arranged three popular American songs  Sinner Man, Peace, I Ask of Thee, O River, and Down by the Riverside  for chorus and orchestra.

She made a work where everyone would know the words, Kosma said, with varied and unique instrumentation. Peace is for strings and chorus only.

The strings mimic the river, Kosma said. The brass get to show off in "Down by the Riverside." Theres audience participation in the first movement and the third movement. Its just a lot of fun. 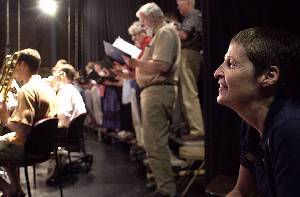 This is the Kosmas first collaboration with Walker, and the Randolph Singers, who are directed by Larry Hamberlin.

Gwyneth is wonderful to work with, delight is more the word, Kosma said. She is familiar with the Randolph Singers. Theyre a good group.

Theyre going to get a lot of candy, Kosma reiterated. Humperdink is close to Wagner, almost a mini-Wagner. The orchestra likes it  its juicy. The Dream Pantomime is just beautiful lush orchestration. You can hear the angels floating. ...

This concert will mark the end of Kosmas third season as music director of the Philharmonic. A New Jersey resident who plays bass in the Metropolitan Opera Orchestra, Kosma commutes to Vermont to lead the orchestra.

Theyre playing together better, Kosma said of his three years. Theres a noticeable improvement. Im happy with the direction of the programs  Vermont composers, young soloists, out-of-towners. Ive heard remarks from the public that theyre happy with the programs.

Kosma expects the nature of the programs to change over the coming seasons.

Were starting to build up to some bigger works, heavier overtures and symphonic works, he said. I think were going to hear some of the more familiar things  maybe a Beethoven symphony.

Asked how he feels about all the work and traveling, Kosma replied, Im having a wonderful time.