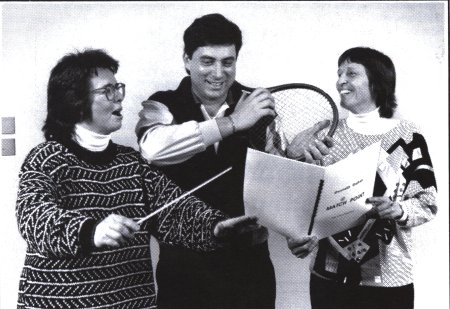 A summons from the Little Orchestra Society skittered across the transom a while back, directing us to 132 West 65th Street at 9:30 yesterday.

It was chalky out, threatening snow, and the temperature was that sort of neither-here-no-there cold that causes a dullness in the bones. But it was pleasant and warm inside 132, which is the security entrance to Avery Fisher Hall, and sitting there patiently in her fur was Alix B. Williamson, who took us in hand.

The Little Orchestra Society is 40 years old, Miss Williams explained, leading the way backstage and getting lost. For 39 years, it has been performing children's concerts. Momentarily there would be a rehearsal of a rather unusual piece, to be performed before about 1,000 children -- children regarded as "needy" in one way or another. The real performances are scheduled for today, at 11 A.M. and 1 P.M., in the same hall.

The piece, Match Point, tries to evoke the sounds and tensions of a tennis match, and as such, while the orchestra plays, it seemed only fiftting to bring in Billie Jean King, who needs no introduction, as they say, and who would play the timpani by bouncing tennis balls off the drumheads and into the brass section.

Well, we could hardly wait. Miss Williamson, finding the way, settled us in down close to the stage while the orchestra, under the baton of Dino Anagnost, warmed up. At stage left was Billie Jean King, looking smart in a white turtleneck, a big bulky black and white sweater, black leather slacks and shining white tennis shoes. Next to her was the composer, Dr. Gwyneth Walker, who looked like a tennis player herself. They both had those no-nonsense haircuts that don't get in the way of the active life.

Directly, Dr. Walker came down from the stage and mentioned what a kick this thing was for her. She said she had taught theory and composition for 14 years, saving her pennies so that one day she could compose full time. In 1985, she was commissioned by the Randolph (Vt.) High School Band (from the town where she makes her home) to write the band some work. She took up the tennis theme because Albert (Duffy) Miller, the band director, "was known around town, fondly as a tennis nut" and because the composer was a tournament tennis player as a young girl.

Match Point is in four movements: "Tuning Up," "Anticipation," "The Point," and "Marche Triomphante." When they played it in Randolph, Dr. Walker said, "everbody loved it, even the farmers," and so she got the notion to expand it for orchestra. Among other awards, it took first prize in the Composer's Guild national competition in 1985 -- "all from such humble beginnings," she said.

On stage now, Billie Jean King was bouncing balls off the timpani as the orchestra sawed on. A moment or two later she and Maestro Anagnost engaged in a mock volley, with racquets, while the string section put down its instruments and provided the sounds of little pops by plucking the hollows of their cheeks with their fingers. "This is hysterical," Ms. King said.

In this pre-performance audience, a toddler on the lap of Junior Leaguer mother (the Junior League, under its "Chance for Children" program had rounded up the young listeners for yesterday's show from 23 schools around the boroughs) began to bawl. "It isn't that bad, is it?" Ms. King asked from the stage, giving everybody a good laugh. A bottle shortly shut the baby up.

Outside in the lobby, they were lining up the schoolchildren, who ranged in age from 5 to 12 and in long power, on a scale of 1 to 10, from 5 to 12. Needy or not, children are children, every last one of the capable of giving the teacher that look that suggests "hmm, tranquilizers would be nice." (It could have been quite a day for a sharp pharmaceutical rep: "Pardon me, madam, may I offer you something in our new matriculation line? Calm-a-Tot? Bric-a-Brat? Cream-a-Teen?")

Presently it was time to be seated, and there is no describing the din of 1,000 squirmy, squealing children in a high-ceilinged hall built for exquisite sound. They were antsy, fidgety, and until the music commenced it looked like a theater full of worms in caps and mufflers. Then they fell quiet and respectful. They laughed in the right places, applauded generously, listened intelligently. The louder the music, the more enraptured the child.

Billie Jean King told them that "the most important thing is that you have to learn things in life -- there are no quick fixes -- and to be happy with yourself." They seemed pretty happy with themselves yesterday, all right, and a tough audience to boot. As a 9-year-old named Kuni reviewed it afterwards, "Nice, but it wasn't rock-and-roll."