Composer to Write Music for School 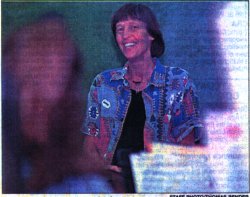 The 50 seventh- and eighth-graders are using $1,000 from last year's candy sale to commission a professional composer to write them an original orchestral work that they will premiere May 21.

"I usually write for college and community orchestras," Walker said. "But I can write for younger people My task won't be to write easy music for them but to write for them at the right level."

Dale Jensen, Harllee's orchestra teacher, recruited Walker to work with the class after becoming acquainted with her through the symphony.

She told them how her interest in music led her to start composing at the age of 2 and later teach music at the college level. In 1982, Walker became one of the few orchestral composers who earns a living by writing.

"I want to see what you look like, what your instruments sound like," Walker told them. "Hopefully, I can write a piece that shows you off at your best."

Harllee Middle wants a composition under 10 minutes in duration. The piece should be more influenced by jazz than the classics. It should "sound like it's from the 1990s" with "lots of weird sounds" and "contrasts" in tempo. It should employ theatrical techniques -- like the plucking of strings to create unique sound effects -- to give each section of the orchestra "something fun to do."

Walker will piece together musical ideas and complete her assignment in about a month.

Deadlines don't concern her. "I'm always commissioned to write for a particular group (for a specific concert or event)," said Walker -- whose works have been performed by the Arkansas Symphony, Brooklyn Philharmonic Orchestra, the New Haven Symphony, and the St. Louis Symphony.

Besides, her deadline for Harllee Middle isn't as demanding as deadlines many famous composers worked under. "Bach wrote cantatas for every Sunday. I'm sure the sweat was coming down his brow on Thursday night."

Harllee Middle will obtain sheet music of the work and the right to premiere it. Walker will retain the copyright.

The piece might be published by one of the several music publishers that Walker works with and be used by other school orchestras. The printed version will include a dedication to the Harllee Middle and note that its orchestra premiered the composition.

Ninth-graders -- who helped raise the money for this project but have moved up to high school -- will be invited to join in the performance of Walker's work.