Fight For Equality Gets New Voices 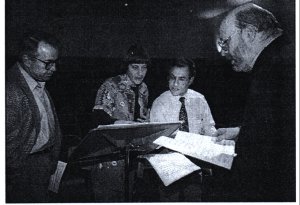 CBS national correspondent Richard Threlkeld's voice didn't betray him as he practiced his part as narrator for a Gilbert School centennial concert.

The truth is, Threlkeld was a little nervous. His role was to read excerpts from the Rev. Martin Luther King Jr.'s "I Have A Dream" speech as part of the high school's performance of an original composition created for the school.

The composition Let Freedom Ring! is a joyous and heady piece. It's the kind of production that gives a national television reporter the jitters, and gets an accomplished composer talking about her struggles with inequalities as a woman.

"We need to do this with spirit," composer Gwyneth Walker told the school chorus and band during rehearsals this week.

Walker was a bit nervous herself. This was the first time she would hear the production she was commissioned to composer.

"When you sing 'I have a dream of freedom, of justice,' you're not saying 'I bought ice cream in the supermarket.' You're saying 'Freedom!' People have died for this word, so let's hear it."

He knew King, and covered the civil rights movement in the 1960s. "I could almost do it off the top of my head," he said. "These words are burned into my head."

And that was part of the problem. He worried that any attempt to imitate King would create a caricature. Chanting "Free at last! Free at last! Thank God almighty we are free at last!" without mimicking King was his task.

The score is about freedom -- a privilege for which thousands have sacrificed their lives, Walker told the musicians and students gathered to hear her production one of several songs to be performed at Saturday's concert.

Walker's original compositions are performed by the New Haven Symphony and Brooklyn Philharmonic orchestras, among others. 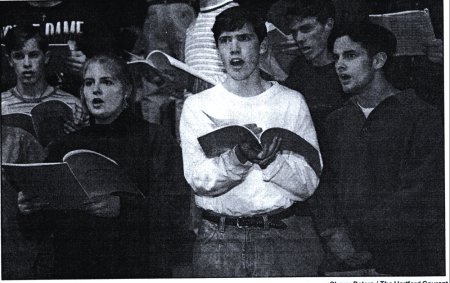 Yet the accomplishments have come despite other people's prejudices, and through sacrifices she feels she has had to make to guard her own freedom, partly because she is a woman.

"There are conductors who can't imagine a woman can compose music for an orchestra. They wouldn't even look at the score," she said, adding that a conductor told her long ago that she was in the wrong field.

The struggle for freedom is not only for black people, she said, but also for other minority groups and women.

"I'm not married and I don't have children," she said. "Writing music is a 24-hour-a-day job and I thought if I had a child I would love them so much I would want to spend all my time with them," she said, explaning her view that it is more difficult for a woman than a man to have both a family and a career.

Having students meet a modern composer was part of the reason the high school decided to commission the work. The other was that it was difficult to find music that chorus and band could perform together.

It's often incidental if the students recognize the name of the composer, and even the most well-known composers died around the time Gilbert School was opening, Minton said.

Threlkeld, who owns a house in Colebrook and is volunteering his time, sees another lesson.

"It's good that the kinds get to learn about this," he said. "The battles for civil rights are as important today as they have been for 200 years."