In the 19th-century youth and into the early years of the 20th century, the Braintree Meeting House was regularly filled with the sounds of traditional hymns.

Though use of the Meeting House has now become sporadic -- an occasional wedding, the Old Home Day celebration once each year on the first Sunday in August -- the structure has been carefully preserved by the Braintree Historical Society.

Now the sounds that once reverberated through the Meeting House will also be restored -- in slightly altered form -- when composer Gwyneth Walker's Braintree Quintet is premiered there at 3 p.m. June 26.

Based on familar hymns from the hymnal once used in the Meeting House, the work was also inspired by community singing on Old Home Day and by the sounds of a woodwind ensemble Walker once heard performing there.

The Braintree Quintet combines them all -- the old hymns, community singing and instrumental interpretations by the five woodwind players, all members of the Vermont Symphony Orchestra who now perform also as the Block Ensemble. 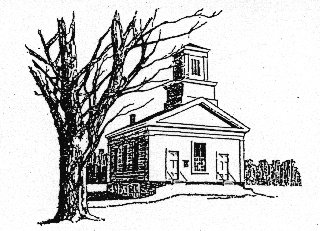 Typical of Walker's compositions -- most of which incorporate a sense of history, theater, humor or all three -- the Braintree Quintet is also more than music alone. It celebrates the Meeting House -- for which it was commissioned by the Braintree Historical Society -- but it also celebrates the sense of community it and the hymns represent.

"The hymns were part of the community history," Walker said in a recent interview. "They meant much more to people than just church."

While Walker was researching the hymns for her composition, a member of the Historical Society visited older members of the community to talk with them about their favorite hymns and their memories of singing them.

"They would tell him about the hymns they enjoyed singing," Walker said, "and, as they thought about it, they would remember things about the times they sand those hymns -- people who were there, what they had worn, special events."

So the hymns, the singing and the surrounding events had become part of the community history, the fabric of memories.

Her own Quaker background -- church services without music -- never hampered Walker's own love for singing hymns. Choral singing was always part of her own musical activity. As a student composer, she wrote and arranged for choruses and sang with them, especially enjoying the hymns.

The idea of "doing something" with Baptist hymns got a nudge when, on an August evening, she heard woodwind sounds floating around outside the meeting house and another when she attended an Old Home Day celebration.

"This is really the most authentic, beautiful thing I've seen in Vermont," she said.

"They use a pump organ and a song master who stands up in front, just the way it was done originally."

And Walker hopes that those who attend the premiere June 26 will enter into the same occasion with the same enthusiasm, joining in with the singing, enjoying the instrumental interpretations.

"We can sing, then sit down and listen, enjoy, stamp our feet -- whatever," she said.

The Braintree Quintet is a work in five movements that can stand alone as an instrumental work, without the singing. Each movement is an instrumental interpretation of a familiar hymn or medley of hymns, picking up and emphasizing their musical or rhythmic elements.

The piece is based on Nearer, My God to Thee, What a Friend (We Have in Jesus), Bring Them In, a medley of God Be With You and Fling Out the Banner and concludes with a movement based on Abide with Me.

"What I did for the instrumental interpretation was to take the qualities of the hymns and enhance them, emphasize them," Walker said.

"If a hymn had a bounce, it would almost become a jitterbug. In What a Friend, I picked up the blusey sound and emphasized it in a clarinet wail."

But, Walker stressed, her interpretation is done reverently.

Her own description of Abide with Me, a newly composed piece rather than an interpretation, shows the influence of message as well as melody on her instrumentalizations.

"The text for the hymn, 'Abide with me, fast falls the evening tide...the darkness deepens, Lord, with me abide,' suggests an anxiety calling forth the Lord's presence," Walker wrote. "This anxiety is expressed in the rather intense next section of music.

"As the anxiety resolves, the hymn tune is played by the oboe. A plaintive counterpoint is heard in the flute, reflected the text, 'In life, in death, O Lord, abide with me.'"

"Both the strength and the suffering of these words predominate in the closing section. The flute concludes with four Gs -- as if praying, 'Abide with me.'"

Audiences for Gwyneth Walker's music have come to expect the unexpected -- performances that need to be seen as well as heard with tapping toes, clapping hands, even a conductor wearing shorts and waving a tennis racquet.

What sets the Braintree Quintet apart is its open invitation to all listeners to join in the singing and become part of a world premiere.

The Braintree Historical Society, which is sponsoring the performance, also invites the audience to come early and bring lunches to picnic outside the Meeting House and enjoy the view from Braintree Hill, nearly a 360-degree sweep of 17 communities, New Hampshire's White Mountains and most of Vermont's highest peaks.

Other music will be performed as part of the concert program, and a reception will follow in the museum room.

"The Historical Society hopes the day will be an occasion for celebration and a renewed appreciation of the rich heritage the Meeting House and the tradition of hymn singing represent for this community," Historical Society President Greg Sharrow said.

Walker, who lives just down the hill from the Meeting House, will be there to meet audience members and join in the singing.

"The old folks think this is great," she said. "It captures the fancy of people who don't go to concerts, who've never heard a woodwind quintet."

"And it's part of our history."