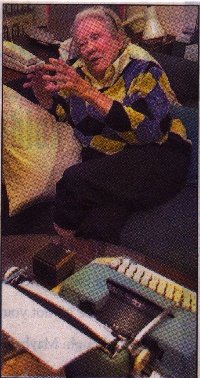 It's pale green and, in the age of computers, it's gone the way of the dodo. But in Virginia Hamilton Adair's simply decorated room at Pilgrim Place, the Smith-Corona manual typewriter is the first thing a visitor notices.

It sits not against a wall, but atop a coffee table fronting the couch from which the poet works, draped in a blanket, daily crafting the lyrics of her long life.

"What else can I do?" she said, drawing hearty laughter from a granddaughter and her friend, Helen Post. Adair's sight has long since gone; her hearing is slowly dimming. She is 87.

"I used to walk and run very fast. Now that is cut off from me."

Her work has been acclaimed by, among others, essayist A. Alvarez, Alice Quinn of the New Yorker and novelist Alice Munro. And now, her words have been put to music.

Selections from Adair's first collection of poetry -- published at 83 -- titled "Ants on the Melon," are part of a Mountainside Master Chorale's production of "The End of an Era -- Music of the 20th Century" to be performed in Claremont on Sunday.

The poet, who is retired after 22 years of teaching literature at Cal Poly Pomona, sat Friday among of folders that collect her unpublished poems, works that span a lifetime spent writing. Adair's self-deprecating analysis of her fame masks a genuine humility.

"The old girl is still whacking away at her old typewriter," she said with a grin.

Each day, the routine is the same, she said. She sleeps fitfully, if at all.

"Regardless of what time I go to bed, I get up and make myself coffee. I usually find I have something to say to myself until I get too hungry that I need breakfast," she said.

Writing poetry has been a lifetime habit, although she had no desire to publish her work until her children grew up. She had three children by the late historian Douglass Adair, once a Clarement Graduate School professor.

"I've never wanted to publish until recently because there wasn't anything else to do," she said. "I suppose I could make baskets."

Delighted by her friend's use of metaphor, Adair's blue eyes glittered.

"What I've done are scrap baskets," she joked.

Those scraps of life captivated Gwyneth Walker, a Vermont-based composer whose An Hour to Dance is one of the works by 10 early and late-20-century composers to be featured Sunday.

Walker's composition is based on seven poems by Hamilton. The 21-minute work with piano accompaniment spans poems that cover the length of Adair's life, Walker said, much as Sunday's program covers the contributions of 20th century composers to the canon of classical chorale music.

During a first meeting at Adair's apartment with the composer in June 1999, Walker feared that although "she respected and loved" Adair's poetry, the poet might not like the way the composer had treated Adair's poetry in her music.

But both women say those fears went unfounded during a congenial afternoon visit.

"While she was here, she said, 'I'd love to play the guitar' and I said, 'it's there, under the sofa,'" Adair recalled. "I find her music fascinating. I can't detect my part in it all." "She was a lovely person, full of spirit," Walker said. "I can only hope to be a gracious as she." 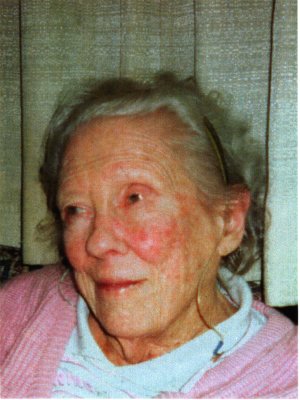 "Some people over-arrange, almost in a way to say 'Look how clever I am.' Hers doesn't. It fits so nicely with the text she chooses," he said.

Walker's treatment of Adair's poems comes near the end of the second half of a two-part program, he said. Rogers chose to highlight early 20th century composers in the first half and late and contemporary composers in the latter half of a varied program, from Romanian folk song to spirituals.

While the 70 members of Mountainside take the stage at the United Church of Christ Congregational for a 7 p.m. performance, the two artists will reunite Sunday to hear the West Coast premiere of Walker's An Hour to Dance.

'I thought it would mean a lot to her if they performed it while she was still alive," Walker said, adding that she made the trip out of love and respect for the elderly poet.